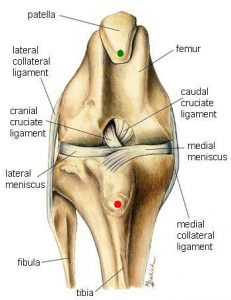 An injured Cruciate Ligament can only be corrected by surgery. There are numerous surgical corrections currently being performed at Allwest Animal Hospital. The most common are 1) Extra Capsular Repair(ECR), 2) TightRope (TR) Procedure (a variation of the ECR), 3) Tibial Plateau Leveling Operation (TPLO), and 4) Tibial Tuberosity Advancement (TTA).

TTA is the newest procedure, and probably the best repair in some cases. The forces within the knee are very complicated and change as the knee is rotated through its range of motion. In a normal standing position, there is a tendency for the lower end of the Femur to slide backward on the tilted Tibial Plateau, this is called Tibial Thrust. This force can be corrected by either cutting the Tibial Plateau and rotating it into a more flat position (TPLO) or by counteracting this force by changing the angle of pull of the very strong Patellar Tendon by advancing the Tibial Tuberosity (TTA).

For more detail about ACL disease, criteria to decide which procedure your dog would need, look under TPLO. Hospital stay, post-op care, and recovery are almost similar to the TPLO procedure. Some dogs return to normal walks quicker than other procedures.

The normal Knee Joint (also know as the Stifle joint, has multiple structures which are important to its function. This drawing shows a view from the front with the muscles removed. It is important to note that the Patellar Tendon, a vital structure in the joint has been removed, so that you can see “behind” it. The Patellar Tendon is a thick, tough band that runs from the Patella (green dot) to the Tibial Tuberosity (red dot). 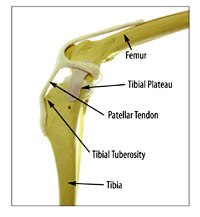 The normal joint, viewed from the side, shows the upper bone, the femur and the lower bone, the tibia. The Tibial Plateau is the actual point of contact between the femur and the tibia. In this diagram the Patellar Tendon is clearly visible.  It is this structure that must offset the abnormal forces that are created with a rupture of the cranial cruciate ligament. 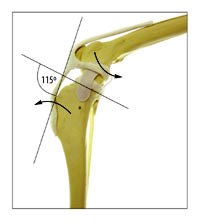 In the typical joint, the angle formed between the Tibial Plateau and the Patellar Tendon is about 115 degrees when the leg is in a normal standing position. 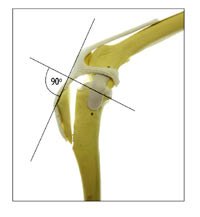 The abnormal motion that occurs in a knee with a torn cruciate ligament is called Tibial Thrust.  After the TTA Surgery, the corrected angle is now 90 degrees, which will offset the forces in the knee that tend to make it unstable. 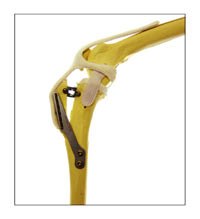 This diagram shows the knee once it has been stabilized with the appropriate Titanium implants. These implants are very lightweight and are designed to stay in permanently.

It depends upon a few things like the weight of the dog, if x-rays & blood test are done or not, how old is the damage etc. Please call or email us for proper estimate for your dog.

Accessibility by WAH
Call Us Text Us